These days I'm replete of all mental energy after spending just shy of half a day hanging around alone with the placid, independent and easy-going baby of the first year who has now morphed into not only a tantrum-throwing whirlwind of dangerous activity but also a constant, clingy shadow. The rest of it is just her being her toddler self, asserting her place and presence in the family, and I know it's a phase but the clinginess. . the clinginess, people!

To say the least, this is a frustrating phase. I dislike how anxiously I count down the hours between her two naps & bed time. And then what a tyrant I am with the older kids about sticking to the schedule each evening and how it's 'hurry, hurry, hurry - everyone eat and get into bed already!'. It seems really mean. Especially considering I have only 3 hours with the older two, between their getting home and going to bed. But I'm failing to get most productive things done and a sense of urgency is beginning to creep up as several deadlines approach. I feel completely inadequate and don't know how anyone with young kids at home finds their balance. For one, they must have really sedate children!

Because today is the first chilly day of the season, and because I can't do much more than fiddling my thumbs while the toddler sleeps, and because I have a dozen things-to-do carried over from yesterday: dinner today is Pea Soup and, hopefully, some kind of sandwiches. The recipe comes from Nigella Lawson. I saw it on one of the early episodes of her tv show on BBC Food very, very long ago and it popped into my mind today because I was trying to think of something I can make very quickly, without having to dice or finely chop anything. This fits the bill quite nicely since all it requires is frozen peas, a shallot and some vegetable stock. And the fact that it is called Slime Soup should hopefully appeal to my kids.


Meanwhile we can pretend I look as rapturous and Domestic Goddess-like as Nigella when she is working in the kitchen, that I magically whip up delicious and impressive daily meals ... despite the toddler clinging to my leg, the kitchen counter brimming with every utensil, jarred spice and whatever else I am cooking with, the sink full of dishes, remnants of breakfast yet to be cleared from the dining table and the puddle of juice the toddler has managed to spill on the floor and is happily splashing with one hand, the other chubby hand firmly holding on to my leg . . . 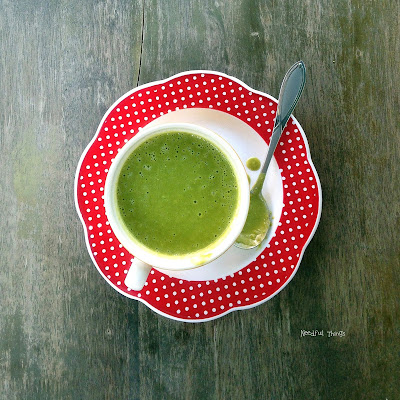 Cook the frozen peas and scallion in the boiling water with the stock concentrate/stock cube until soft and cooked through. Remove and discard the scallion.

Roughly chop the mozzarella and put it into a blender along with the soup. Blend, return it to the pan to make sure all the cheese has melted. Serve.

Thank you for venting! Having just survived the toddler phase, I completely recognize both the "It's bedtime soon - actually they can't tell time, so I'll just tell them it's bedtime NOW!" and the guilt for wanting to spend time with the couch rather than the kids. What I wanted to say was actually that I think it is so important to be honest about these things, because people (women) sometimes have a tendency to make their life with small children seem peachy and full of home made pie in a perfectly clean home and cuddly cute kids. I think it is completely possible to be a good mom AND crave time by oneself AND be bored/fed up with ones kids (and the clinginess, which I am told that one day I am going to miss. But nope, I don't think so). More power to ya and thanks for sharing!

@Anonymous: Thank YOU!
I totally know that I'll miss (and already do, with the older ones) this phase when the little ones can't seem to cuddle with you enough during the course of a day. But this one here will no longer nap unless I'm within touching distance. I love watching her sleep but when I think of the many things I could do meanwhile . . . sigh.

Great combo and looks so good! Thanks for your lovely comments...

Denise Browning@From Brazil To You said...

Venting is healthy! I can understand you situation and also your anxiety to finish the day. I think all mothers can, actually. My children are 5 and 7, and I still look forward to a quiet time at the end of the day.

That's a tough phase and you always feel so guilty for feeling that way. I was really fortunate to not have clingy toddlers and it could be that I had so much family around that they were happy with any one of them. I know my sister on the other hand, because she was no where near family, her children gave her a really hard time, I know she was always frustrated and a bit jealous of me. You'll get through it, don't worry. Before you know it they will be all grown up.
I love Nigella. And I like pea soup. This looks perfect for a cold day.

I know just the feeling, I have a pre schooler and a toddler, :)

Thanks Denise & Nammi. Happy to report that everyone has been bundled off to bed & I'm enjoying these quiet moments before I nod off myself.

@Nazneen: I identify with your sister completely and find that the kids have generally always been happier during visits with family when walking into any random room in the house means you will encounter at least one person within it. My recent (and very frequent) travel is to blame for the baby's clinginess. I guess she just began hanging on to me because I was the only familiar person anywhere we went and then it just became a habit. Hopefully it's a short phase :-/

that my friend is a hug in a tea cup. although i do not have children of my own i can imagine that this careful balancing act is quite demanding. and you know it really is okay to feel what you are feeling. i've had enough friends and family with children and i think as women we have very high expectations of ourselves.

sending you much love, x

From one phase to the other, I'm always glad we all get to vent it out just to be sane.

And I'll happily do it with a bowl of this delicious soup :)

I feel your frustration and I only had a taste of this with an only child but you will wish for those days back sooner than you think. Cliched as it is, the years will go by in a heartbeat and you'll have a houseful of grumpy teenagers. Don't blink - not even for a second xx

I know exactly what you mean. I was so proud of my parenting that my now 2 years old hardly ever cried without a reason during her newborn and infant days. Ask me now? I know this phase will go quickly and I'll miss it one day. Hang in there.

Although I have way passed those years, I know how you feel as I was always running around to finish my pending work during my daughter's 1 hour afternoon nap. I always looked for quick meals option but fortunately i had our orderly to help me with house work and that phase passed with a blink.But even when kids grow, your commitments change and you never have enough time for yourself.So venting is good

I so smiled at your vent. I have a new kitten (to deal with one of my kids leaving for college this year) and she wants to follow me into the bathroom, like one of my kids wanted to do as a toddler. I was a big consistent bedtime proponent and loved those few hours of peace at night!

You are a wonderful mom and you're doing a great job with your kids. Now, have another cup of tea!

Pretty! This has been an incredibly wonderful post. Thank you for supplying these details. 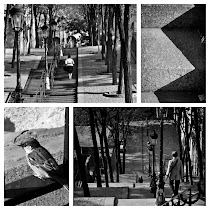